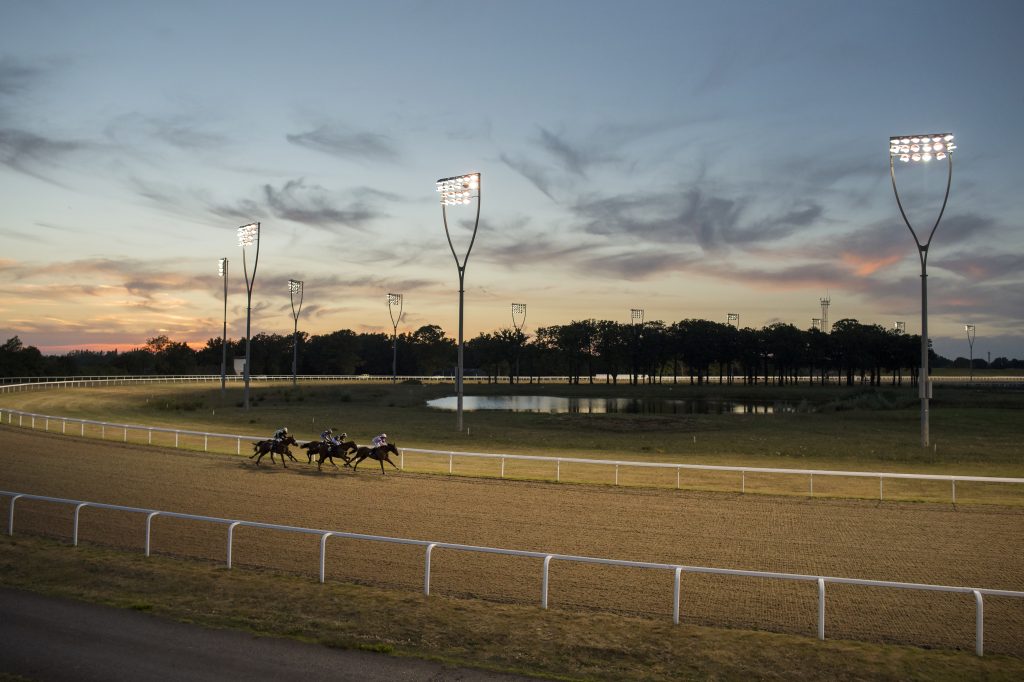 Just as the jumps’ season is hotting up with the first meeting at Cheltenham on Friday and Saturday, we’re preparing for the new All-Weather season.

After day time action over obstacles at Carlisle, Ludlow, Southwell and Thurles comes some competitive action from Chelmsford and Wolverhampton. As usual, we’ll have tips and analysis available for all this action. Here’s three runners from the evening’s action who caught the eye and form part of a Thursday Three-For-All Treble.

Few trainers do better on the All-Weather than the Newmarket based James Tate, particularly with his three-year-olds. He’s had thirty two winners with that age group on synthetics this year, with particular success coming at Chelmsford.

The yard’s forty-one runners at the Essex venue this season have yielded fourteen winners at a £16.15 profit to a £1 level stake. Tonight he sends Futuristic there, his son of the year’s star sire Shamardal.

The three-year-old colt has scored twice from four career starts, including when bolting up on handicap debut earlier this month. A pound well in under a penalty, stepped up an extra furlong, with P J McDonald retained, a third win from five runs surely awaits him.

Hamdan Al Maktoum has two highly capable jockeys retained in the form of Jim Crowley and Dane O’Neill. The latter, less well known than the former Champion, has had a very productive season with fifty winners, three of which have come in the past ten days at Wolverhampton.

He’s now ridden six winners from twelve runners at the Tapeta course. That includes a winner with his only ride of the day last Thursday onboard Dawaam. A similar feat looks a distinct possibility tonight as he goes there to ride Simon Crisford’s Abwaaq.

The US-bred juvenile was backed into favouritism on his debut earlier this month under Jack Mitchell. He only found the re-opposing San Rafael and one with racecourse experience too good there. Now seven pounds better off with that rival, he should be more than capable of getting off the mark with O’Neill taking the ride.

Rab Havlin is enjoying a productive period as Frankie Dettori’s understudy at the John Gosden yard. He’s had particular success on the All-Weather, on which he’s ridden both Enable and Stradivarius to victory at the start of their careers.

He’s teamed up with John Gosden for nine winners at Chelmsford over the past twelve months. The pair could hardly be in better form of late around the UK either, with the duo teaming up to land eleven winners over the last month.

With that in mind, it’s hard to oppose the gelding Pianissimo. He remains a maiden, however that’s not for a lack of trying. Placed in all five starts, he posted an RPR of 83 when chasing home a well backed favourite at Ascot last time. A repeat of that would more than suffice in what looks a less competitive contest.

The treble can be backed at 29/1, best priced at time of writing.