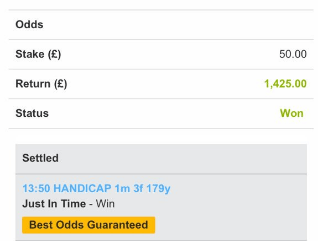 Here at myracing.com we are well known for our consistent profit on our Win Accas & we continued adding to that by smashing in a tasty £249 treble on Tuesday! We have a £661 Mega Acca and a £206 Win Acca on site for tomorrow’s racing so don’t miss out and back them both in 1-Click HERE!

A Genie In Abottle WINS at #Galway – SEND IN THOSE SLIPS FOLKS pic.twitter.com/doaDIAdmXd

Loads of our followers were on the Acca success which is always great to see, and plenty of them shared their bet-slip with us! Below are just a handful of them – Congratulations to everyone on!

£5 free bet too! Thanks guys pic.twitter.com/f8aAksLTGR

You boys have too much time on your hands!!!! BooooooooM well done again!!! pic.twitter.com/dMH8BFIvUJ