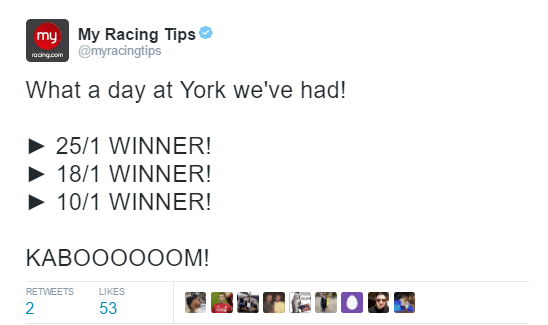 What a day at York we’ve had!

With the football international break there was no Sky Sports Super Sunday, but myracing.com managed to fill the gap with a Super Sunday on our tips with 3 huge price winners at 25/1, 18/1 and 10/1! These contributed to a massive daily profit of £214 following last month’s £1,100+ profit!

Kicking us off was Muraabit tipped at 25/1 in our horse racing tips at 8.45am this morning. Running in the 2nd race at York at 2.40pm, he’d been off the track for nearly a full year but we had faith that Ismail Mohammed could continue the progression he showed last August. Running off a mark of 80 and making his first appearance at York, he struggled to find space in running but when switched right by Thomas Brown he stayed on strongly to grab the lead.

Up next was our Early Value Tip – posted by 8pm the night before each day – which had already had 4 winners in a row! £5 Each Way returned £72.50 and he looked the winner all over from a long way out, staying all the way to the line despite the 2 mile trip having been a bit of an unknown before hand! That made it 5 winners in a row for the Early Value tip which is now £830 in profit with every bet tracked. As a result of this excellent long term profit, we’re going to increase tracking stakes to £20 (or £10 Each Way) from this evening, showing our confidence in this tip!

AGENT GIBBS GET UP AT YORK, FROM THE FRONT!!

Finally to finish it off – Agent Gibbs tipped at 18/1! A 15p Rule 4 (included in our calculations of profit) meant an actual pay out of 16.3/1, still massively beating the Starting Price of just 7/1 – huge value for us! He showed huge spirit to battle all the way to the line under a strong ride by promising claimer Mitch Godwin, and provided John O’Shea with a winner from his only runner at York in the last 5 years!

Just click the Daily Tips tab at the top of your screen to join in now! Our full tips are posted at 8.45am every day, and whenever there is evening racing we will also add in an evening multiple between 5pm and 5.30pm. If we spot any good value for the next day, we’ll also post an early bet for the next day, as well as the Early Value Tip which is posted by 8pm every day!

As always there were some massive winners on our tips. Here are some of the best!