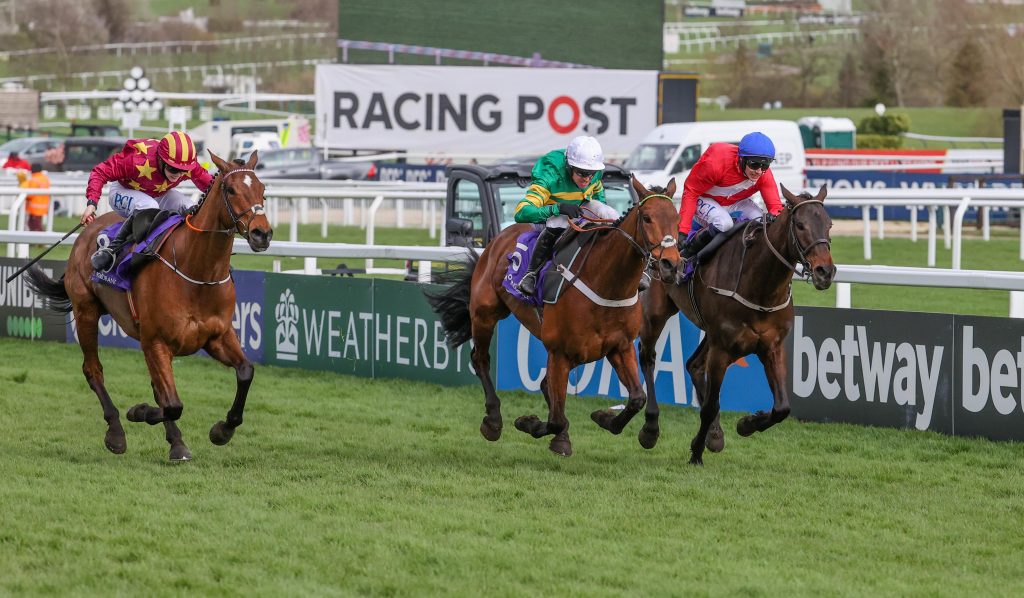 With the book now closed on difficult 2020, it’s full steam ahead into the new year. 2021 brings more opportunities for stars to emerge and despite a challenging 2020 (to say the least), we had plenty emerge last year.

The Christmas period threw up plenty who could fit into that bracket. From the obvious, to those you may have discounted, we’ve come up with five horses who you should follow throughout 2021, and perhaps beyond.

You may find some of these horses in our free horse racing tips, which includes Accumulator and Lucky 15 tips!

Don’t give up on Willie Mullins’ Allaho just yet. He’s had just five runs over fences, including a narrow third in the RSA Chase at last year’s Festival. That took his 3m record over fences to 234, with his sole chasing success coming over the 2m 5f distance.

Given the way he tanked into the Savills Chase at Leopardstown, a return to that distance should be just what the doctor ordered. A race like the Ryanair could be just up his alley and Mullins has won three of the last five renewals.

A switch to a spring surface is another positive for him and he remains full of potential for his master trainer.

It’s hard not be impressed by the exploits of Atholl Street, who is yet to put a foot wrong for Paul Nicholls. He certainly didn’t pull up trees in his sole bumper start, but he’s unbeaten since being sent over obstacles.

In the colours of Trevor Hemmings, he followed up a debut success at Taunton with another facile success over the same course and distance. A 190,000 euro purchase, he looks to have a serious engine and his dam is an unraced sister to Kicking King.

There should be far more to come from this exciting prospect and he looks one to thrive on spring ground later in the season. Granted, he hasn’t beaten much yet, but he’s been visually impressive and there’s plenty to like.

Away from the obvious, January Jets looks like he could make into a very useful chaser for Henry De Bromhead. Given some very tough tasks both over hurdles, he bumped into Envoi Allen and Janidil on his opening two chasing starts.

He deservedly got off the mark over fences at Leopardstown over Christmas, a very cosy winner of a beginners event. He’s progressed with each of his three chasing starts and the best is surely yet to come from him.

Speaking after the race, De Bromhead said he’ll “aim for the good novices in the spring” with this seven-year-old, and that should tell us plenty about far he can go.

A useful novice chaser last season, Nube Negra was placed at Grade 1 level in the Henry VIII Novices’ Chase at Sandown. He ended his novice campaign with another second, this time in the Grade 2 Kingmaker at Warwick behind Rogue Vif.

A 20/1 shot on seasonal reappearance in the Desert Orchid, he could be called the winner miles from home. He cruised into that Grade 2 event and only needed a hand ride to shoot clear of a useful field. Recording an RPR of 170 in the process, it was a serious performance.

He’s set for a big campaign that likely culminates in the Champion Chase. He looks set to be a rising force in 2021 and can only get better with further experience for his connections.

Previously trained in France by Francois Nicolle, Royal Pagaille didn’t looked anything special in two opening runs for this yard. He’s gone from strength to strength since handicapping, however, and announced himself as a serious talent in the process.

Winning at Haydock on his handicap bow, he couldn’t have been an easier winner at Kempton over Christmas. He tanked into that contest which included some very useful rivals, quickening up impressively on the run-in for a comfortable success.

At the age of just six, age is certainly on his side and with the handicapper likely to take a dim view of that victory, graded handicaps and beyond are likely to be his next port of call.