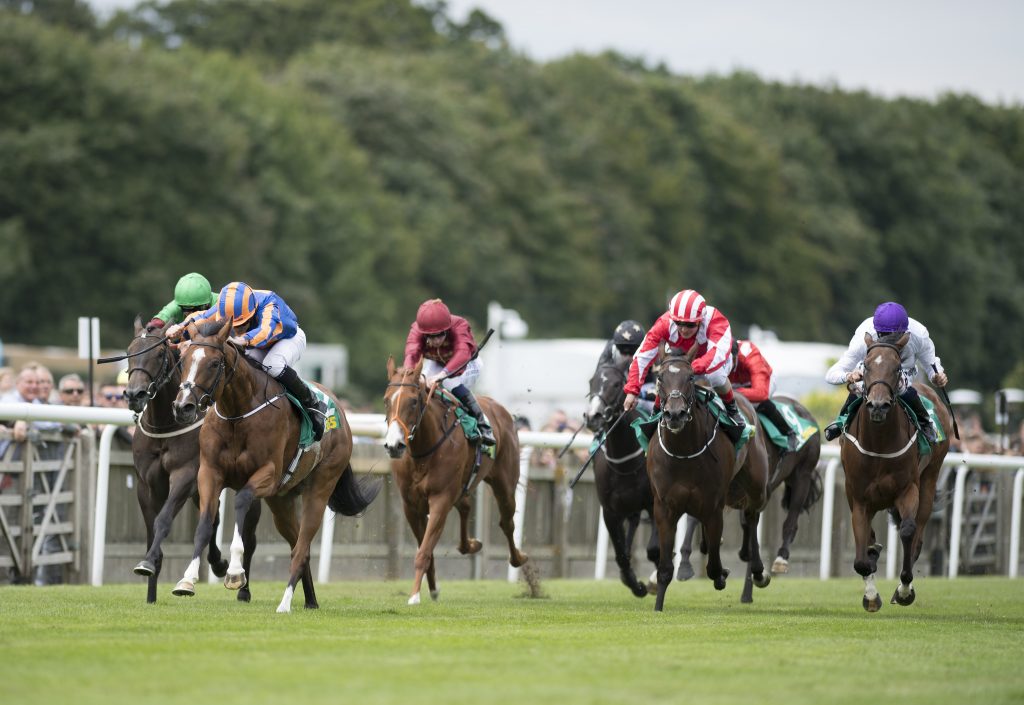 The middle of summer is all about the Newmarket July Festival, which attracts some of the best horses in training for a three-day meeting on the famous July course.

With races like the Falmouth Stakes and the prestigious July Cup, there’s plenty worth tuning in for if you’re a follower of our ITV tips.

What makes the Newmarket July meeting so popular then? Well, it’s time to find out with Luke Parkinson’s guide to the great fixture.

The opening day of the July Festival certainly gives the punters plenty of opportunities to try and land themselves a winner.

There are no less than seven big races on the opening day with the Group Three Bahrain Trophy raising the curtain on the hugely successful meeting.

The nicely named Housesofparliament was a memorable winner for Aidan O’Brien and Ryan Moore in 2016, but it’s John Gosden who has dominated the Bahrain Trophy with Mr Singh notching up his fifth win in the race in 2015.

The July Stakes is always worth a watch on Ladies Day as well, with plenty of top contenders attracted to the Newmarket Group Two. As a race for two-year-old colts and geldings, it highlights the stars for the future with the likes of Cardsharp and Advertise among the most popular winners.

If that wasn’t enough then the Princess of Wales’s Stakes is sure to whet your racing appetite. Some great horses have won this down the years, but none can lay claim to the popularity of Big Orange. He won this race in 2015 and 2016, before going on to land the Gold Cup at Royal Ascot in 2017.

2018 Derby Hero, Masar, will aim to follow suit this year after returning to action at the Royal meeting last month. He looked to lack a little bit of sharpness last time and did well to stay on his feet when stumbling badly and almost unseating his rider at the start.

Hopefully, that rustiness has been shaken off in the last few weeks and his class can shine through at flat racing’s HQ.

Another seven races will make up Friday’s action, including some quality races for the female equine stars.

The Silver Bunbury Cup gets the day off to a flying start before the Duchess of Cambridge Stakes showcases the fillies in the second race of the afternoon.

Sir Michael Stoute and the late Sir Henry Cecil have shared eight victories between them in the Duchess of Cambridge, with the majority of those falling in the 80’s and 90’s.

However, the feature race is saved for later in the day when the Group One Falmouth Stakes takes centre stage with the fillies once again coming to the fore.

Trainer William Haggas appears to have a couple of excellent chances at the top of the market for this one, and Beshaayir may well be the best of his duo.

She won a Listed race on the Rowley Mile at the end of last season, before returning this year to win the Group Two Lanwades Stud Stakes for Fillies and Mares on the Curragh.

She hasn’t been seen since then, but if the upward curve can continue, then she could be the pick of this bunch.

It’s the last day of the meeting, but it is by no means the least. Saturday’s action is almost as good as it comes with another seven races that include two Group races.

The first of those to really get excited about is the famous Bunbury Cup. The name comes from Sir Charles Bunbury who served as the senior steward of the Jockey Club, and also introduced both of the Classics held at Newmarket in the shape of the 1,000 Guineas and 2,000 Guineas.

From there, it’s all about the Group Two Superlative Stakes before they line up for the hottest show in town, which is more commonly known as the July Cup.

The Group One contest is one of the most valuable and prestigious sprint races in the world with the winner often regarded as one of the best sprinters in Europe. You don’t have to look far back in the roll of honour to work that out either, with US Navy Flag, Harry Angel and Limato just some of the recent winners.

This year’s super-speedster may well be Advertise, who is the one to beat after scoring in the Commonwealth Cup at Royal Ascot. He appeared to relish the drop down to six furlongs, and although conditions are likely to be a lot firmer this weekend, that shouldn’t be a worry with his record on good-to-firm reading 1st, 2nd, 1st and 2nd.

Not bad if you’re looking for a NAP of the day this Saturday.