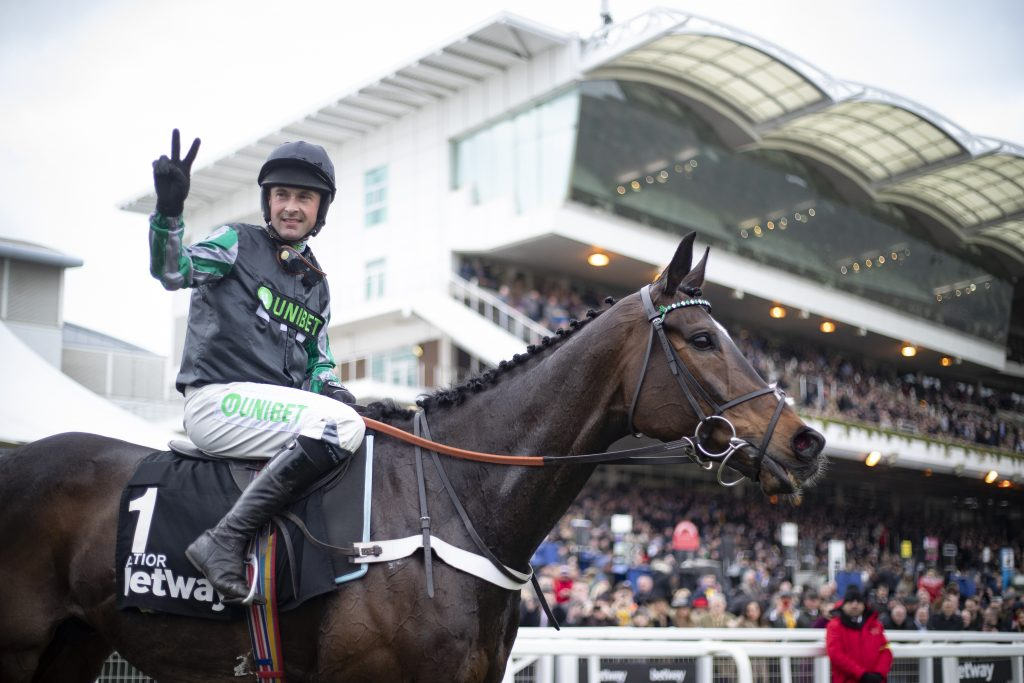 With just a week to go until the 2020 Cheltenham Festival, anticipation is building. The departures of Tony McCoy and Ruby Walsh from the weighing room in recent years has left the door open for a new Champion Jockey.

Here we take a look at five possible contenders, including their best chance of success. Make sure to use our tips and analysis as we builds towards the Festival, as well as our Cheltenham Free Bets. We also have a monster 4,122/1 Willie Mullins acca on site.

The Irish-based Blackmore’s career has exploded in recent years, with six winners in the 2015-16 season followed by thirty-two, thirty-four and ninety. The highlights of last season came at the Cheltenham Festival, when she landed both the Albert Bartlett and the Close Brothers’ onboard Minella Indo and A Plus Tard respectively.

She’ll have the backing of Henry De Bromhead once more, who has provided her with six Grade One wins this term already. Dual Grade One winning chaser Notebook in the Arkle, the unbeaten Honeysuckle, in either the Mares’ or the Champion Hurdle, and Ryanair favourite A Plus Tard are three rides for which she’ll be excited.

The mount who possesses her best chance of success in 2020 has to be previous Festival winner MINELLA INDO. The gelding came on leaps and bounds last term to land two Grade Ones, including the Albert Bartlett. After a creditable second on chase debut over a trip short of ideal, the seven-year-old justified favouritism at Navan in January. If continuing on his upwards trajectory, returned to the scene of his greatest triumph, he should go close in the RSA.

Nicky Henderson’s stable jockey is yet to ride a Grade One winner in the UK this season but he looks sure to put that right at the 2020 Cheltenham Festival. Wins onboard Altior, Pentland Hills and William Henry in 2019 saw him crowned top jockey. With 10 wins already at Cheltenham and with the backing of Henderson, further glory has to be expected.

Three of his likely mounts are vying for favouritism at the current moment. Dual Champion Chase winner Altior has strong claims of completing a three-timer in the race after his recent return to winning ways. Santini fits the profile of a Gold Cup horse and has been slowly brought to hand by Henderson and Shiskin is a rocket who has strong claims in the Supreme.

One who provides some each way value is MISTER FISHER in the Marsh Novices’ Chase. A useful novice hurdler, he’s taken his form to a new level since going over fences. Second to Torpillio on chase debut, he landed a competitive novice event over track and trip in December. He then beat a number of useful sorts in a Doncaster Grade Two, posting an RPR of 157. The Jeremy gelding won’t have to improve much more to threaten in a wide open renewal.

The backing of JP McManus has been a large part to Geraghty’s success at the Festival at which he’s the leading current rider with thirty-eight victories. He’s had something of an interrupted season but his twenty wins have come from just seventy-five rides. In what’s surely one of his last Festivals, he’ll want to make the most of it.

The McManus battalion has plenty of live chances this year, including the mare Epatante who heads the Champion Hurdle market after a decisive win at Christmas. Champ was in control in the Dipper on New Year’s Day before falling and Geraghty will no doubt want to make amends for that.

His best chance of Festival glory this year must come from DEFI DU SEUIL though. Geraghty has been onboard for all bar three of his fourteen wins, including success in the JLT last year. He’s emerged as one of the best two-milers in the UK this year with three wins, including two at the highest level. With a Cheltenham record of six-from-eight and after three impressive seasonal wins, he’ll have plenty of backers for the Champion Chase.

Russell had ridden winners at every Festival since 2006 before firing a blank last term. That came as a big surprise after he’d ridden four winners in 2018, the most of any rider. It’s hard to imagine the Irishman out of the winners’ enclosure for two successive years though, particularly with the backing of Gordon Elliott and Gigginstown.

The recent injury to Jack Kennedy will only enhance his importance at Cheltenham. He looks set to have a cracking book of rides, including warm favourite Envoi Allen in the Ballymore Novices’ Hurdle. He may also have the choice between Delta Work and Presenting Percy in the Gold Cup.

That blank in 2019 may well been as a result of not having a ride in the Pertemps Handicap Hurdle, a race he’d won in 2016, 2017 and 2018. He’s likely to ride THE STORYTELLER, whom he was onboard when winning the 2018 Plate. He’s reverted to hurdling this term, last seen given a considerate ride to qualify for the Pertemps. Well treated in this sphere, he’s a hugely interesting contender.

The departure of Ruby Walsh from the weighing room has opened the door to Paul Townend. There were already signs that he was emerging from Walsh’s shadow last season when he landed the Gold Cup onboard Al Boum Photo as well as the Arkle on Duc Des Genievres.

A ten-time winner at the Festival, he’ll have numerous big rides this year for Mullins, for whom we have a 4,122/1 acca on site. That includes Asterion Forlonge in the Supreme, the odds-on Benie Des Dieux in the Mares’, Champion Bumper hopeful Appreciate It, the rapid Chacun Pour Soi in the Champion Chase and the admirable Min in the Ryanair.

By far his best chance of success comes in the form of AL BOUM PHOTO. A lack of superstars in the staying chasing division, injury to Native River, and his impressive return win at Tramore suggest he’s going to be very tough to beat as he bids for the double.

**Rides are subject to change. Gordon Elliott, Nicky Henderson and Gordon Elliott have dominated Cheltenham Festivals in the 21st century. Those three along with Philip Hobbs and Paul Nicholls have a number of strong chances this year. Here are five of their best in a 1,187/1 acaa.