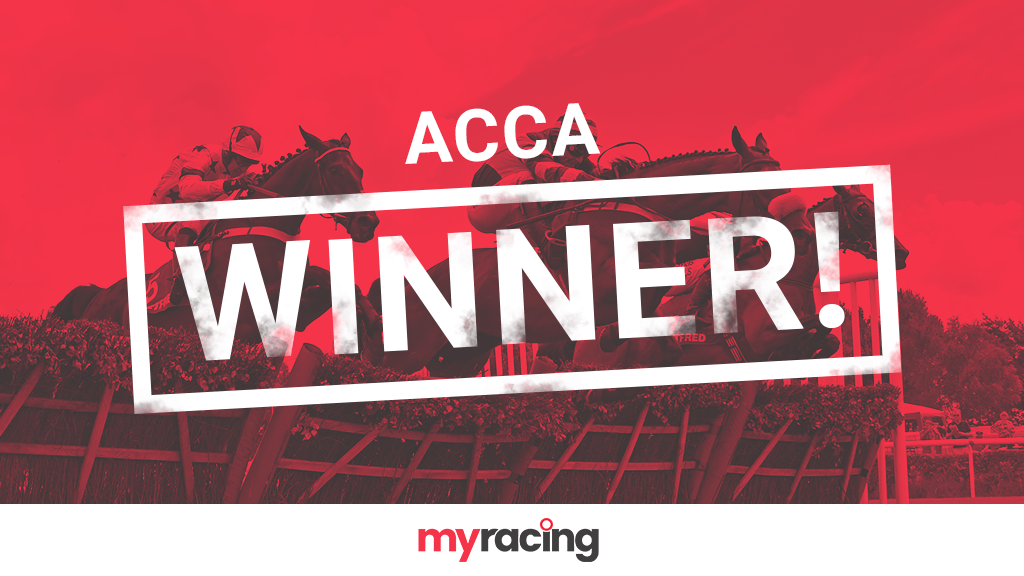 What a time to land a 28/1 Win Accumulator! With Cheltenham around the corner, that’s exactly what we did on Tuesday afternoon and it was great to see so many of our followers land some tasty bets. We have daily Accumulator Tips for every single day there’s racing on along with plenty more selections so make sure to check them out. We also have a 22/1 Cheltenham Festival Antepost Accumulator that includes four strong selections that we think will be coming home in front at next weeks National Hunt showpiece.

GET IN YOU BEAUTY – JUST IN TIME FOR CHELTENHAM!! 😎

LEG #1 – SMARTY WILD (9/4) was the one getting the bet underway at Exeter. He was sent off at 9/4, which was a sizable drift compared to the 6/4 we tipped him at the evening before. It ended up just meaning a better price for us though as he travelled well throughout and was pushed clear for a comfortable victory. He didn’t always jump that great but he was too good in end, winning by 11 lengths – The first leg was in!

LEG #2 – SONG SAA (2/1) was also a drifter from the price we advised her at, she was sent off at 2/1 compared to the 6/5 we put her up at initially. Again though, that just meant a boost to our Acca odds! The mare was hard pressed four-out but she battled well to pull away and start asserting after the next. Although she idled a bit towards the end, she kept on well and had done enough already to secure the win, and leg 2 for the Acca.

LEG #3 – Completing the pack of drifters, and concluding the bet was JAMMY GEORGE (2/1) at Newcastle. He travelled pretty smoothly throughout and when push came to shove, the win never really looked in any doubt at all. He took the lead up at three-out and continued to saunter further clear without having to be asked for too much of an effort. The winning margin was 8-lengths in the end but it could have been much more considering how easily he won. That was the horse’s first win over hurdles on his 6th attempt, and thankfully for us, that landed our 28/1 just in time for Cheltenham – GET IN!

All of our Free Horse Racing Tips can be backed in 1-click with a range of bookmakers on our site! This means you don’t have to go through the hassle of adding them all to your bet-slip yourself. They go live the evening before a days racing at around 8pm. It’s not just Horse Racing Tips that we do either, we also have Greyhound Tips & American Horse Racing Tips every evening along with Australian Horse Racing Tips for the overnight action down under!

It’s great to see that many people were on our winning Acca – Congratulations to everyone who was, below are a few of the winning slips that we got sent in!

Thanks guys. Nice bit of drift in prices too pic.twitter.com/Nxy6eVMz5g