Why Mengli Khan Win The Arkle 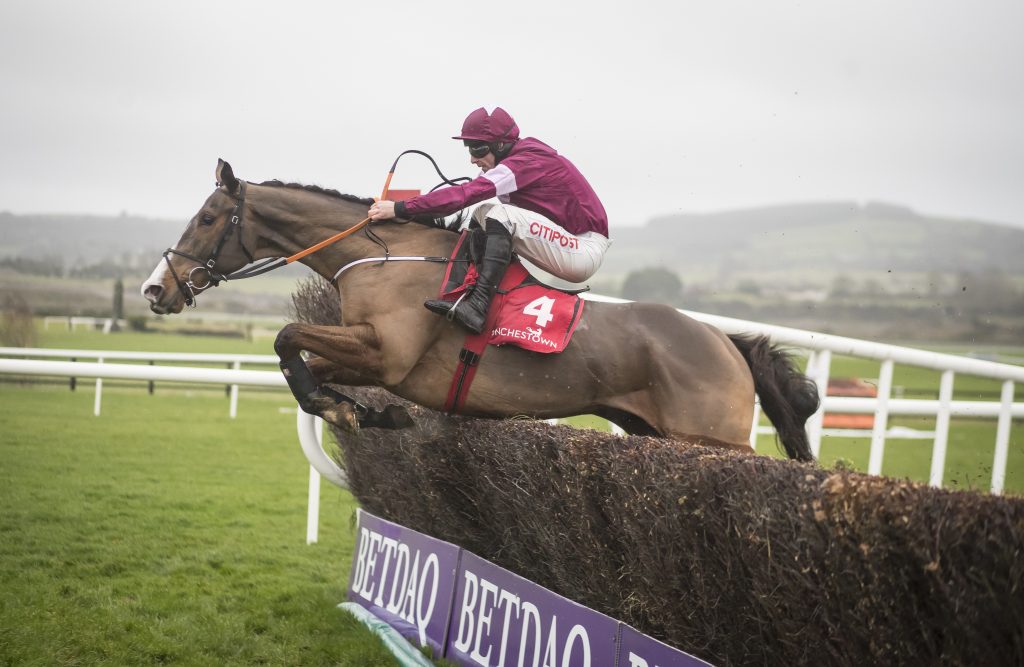 Adrian Wall states his pitch on why 2018 Supreme Novices’ Hurdle third Mengli Khan is a solid bet for the Arkle at the Cheltenham Festival in 2019.

Gordon Elliott and Gigginstown will be licking their lips at the thought of Mengli Khan bringing them home the Arkle Challenge Trophy and it is a big possibility. A gallant third in the Supreme Novices’ Hurdle at the Cheltenham Festival in 2018, all you have to do is look at a replay of that race to see he should be much better suited to the larger obstacles. He jumped like a dream that day and travelled all over the field for the majority of the race. Turning for home, when the taps started turning, he just lacked that burst of acceleration to plough through the soft ground and just got outstayed by two horses that loved the conditions, Kalashnikov and Summerville Boy.

Many will ask why Mengli Khan should reverse the form with Kalashnikov in the Arkle if they do meet? Well, in my view there is every chance he probably will reverse the form. Firstly, the ground was very soft at the Festival last year. Now don’t get me wrong, we know Mengli likes a bit of juice in the ground but Good to Soft would play more to his strengths as he is flat bred and on slightly better ground would be expected to have a good burst of speed in the latter stages of the race. He is a Lope De Vega gelding which is astonishing as he looks a proper chaser. It just shows breeding is important but there can be exceptions. He simply got outstayed in very testing conditions last season in the Supreme.

He jumped his hurdles big and bold and visually he just looked like he would appreciate a switch to fences. He has a big long neck on him and is a big horse so it looks a great choice by Gordon to send him down the Arkle road this season. He couldn’t have been more impressive on his chasing debut at Punchestown last week. He jumped beautifully, travelled beautifully and absolutely destroyed Forge Meadow (2nd) who was only rated four pounds inferior to him over hurdles. He also had to give the Jessica Harrington mare seven pounds and she was race fit. I don’t think she ran up to her hurdles mark mind and she doesn’t look a chaser but nonetheless she is a good yardstick and he beat her very convincingly.

A few people crabbed Mengli Khan’s chasing win and one man that was pretty vocal about his prominence in the market is Paul Kealy of the Racing Post. He argued that his chasing debut was run in a very slow time and that Lalor’s time for his latest success was much quicker. He was quoted saying “Ante-post silly season again. If Mengli Khan is a 7-1 shot, Lalor should be evens”. That is his opinion I guess but I don’t see how you can compare an Irish Beginners Chase to a proper true-run Grade 2 in the UK. Apples and oranges spring to mind. The beauty of this game is we all have our own views. It wouldn’t be much fun if we all had the same opinion would it?

The bottom line for me is Mengli Khan is a 150-rated Grade 1 winning hurdler who always looked a horse who was going to improve for a fence. I don’t care what time he posted on his chasing debut as it was a slow run race and it was a schooling session for him. Get round, ping the fences, come home in front, job done. He also had a wind operation since March which could bring out even more improvement. We will learn a lot more about him when he runs in a Grade 1 over the Christmas period but for me, he should be favourite for the Arkle. Don’t let the Supreme form sway you as hurdling and chasing are two different codes. Al Ferof destroyed Sprinter Sacre in the Supreme but we all know what happened twelve months later in the Arkle.

When Mengli Khan was jumping beautifully, I couldn’t resist placing a bet on him at the available 12/1 as he was approaching the second last fence. I knew the 12/1 would be long gone three minutes later. If nothing else, we have a nice price to go to war with but my view is MENGLI KHAN WIN THE ARKLE!