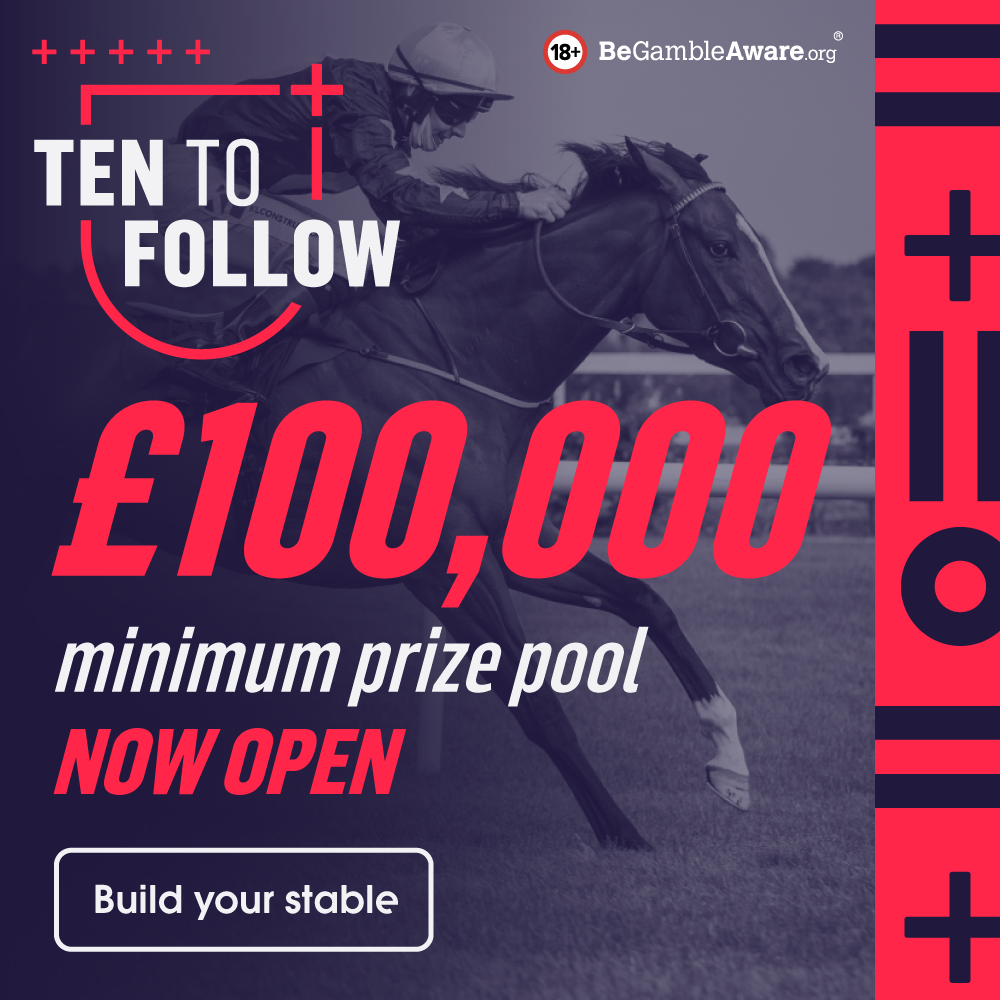 The National Hunt season is really kicking it up a notch with the Cheltenham November meeting this weekend. Saturday the 13th November is the closing date of the Tote 10 to follow competition. It’s time for Adrian Wall to look over the runners and select his fantasy team for the season ahead.

Willie Mullins could have this season’s Arkle winner on his hands. It was a bit of a surprise when he was entered in the Supreme Novices’ last season as he looked a little slow, but he proved his doubters wrong and won the race by half the track. He has a huge engine and is a hugely exciting prospect over a fence.

Henry de Bromhead’s charge is the current favourite for the Betfair Chase and he should give us plenty of points this season. The dual Grade 1 winner won the Savills Chase last season and has placed in a Ryanair and a Gold Cup. Still only a seven-year-old, he still has a good two or three years right at the top over fences.

Winning form around Cheltenham is never a bad thing and this lad won a novice around here, albeit at skinny odds. He won the Persian War at Chepstow last month and could easily be well ahead of the handicapper in the Greatwood Hurdle at Cheltenham on Sunday off a mark of 140.

This is a hugely exciting horse for the Emmet Mullins camp and this horse will run in a Punchestown Grade 2 on Saturday so hopefully he can get on the board. Rated 96 on the level, he looks a monster over fences and made it the perfect two from two at Cork when last seen. He looks sure to eat at the top table this coming season.

The JP McManus-owned seven-year-old son of Yeats has been brought along slowly and it looks like he could have a tilt at the Gold Cup this season. He won the Marsh Novices’ at the festival last season and even if Envoi Allen (fell) was at his best on the day, he still might have won. Then he went on to beat Shan Blue by 32 lengths at Aintree. This is an improving chaser.

Got his campaign off to the perfect start when winning the Clonmel Oil Chase by 15 lengths, a race that Willie Mullins usually dominates. He found Allaho too good in the Ryanair last season but McManus’ gelding is still only a six-year-old so there should be plenty more improvement to come.

People might try to be too clever and leave this stunning mare out of their fantasy stable but if they do they are making a big mistake. She is now an eight-time Grade 1 winner and dominated the Champion Hurdle in 2021. She is still only seven and will be kept very fresh. It will take a good horse to stop her in her tracks.

In my opinion, this beautiful specimen doesn’t have the speed to win a Supreme Novices’ Hurdle. Yes, I know that you need to stay further to win the race but if he got tapped for toe in a Champion Bumper then you would have to be concerned. If he goes for the Ballymore, he should win it. He looks like a future three-mile chaser in the making and a real star of the future.

Could this Seven Barrows horse be the next Sprinter Sacre? He has done nothing wrong so far and his only blemish from 10 career starts was when he fell at Newbury on his second start. This monster has a huge cruising speed, jumps for fun and has unbelievable power. He looks like the Champion Chase winner in waiting.

Gordon Elliott’s four-year-old was brilliant when landing a Grade 3 at Naas this month, disposing of classy types like Quilixios and Jeff Kidder with a minimum of fuss. He has only tasted defeat once in his career and could be a monster in the making. He could run in either the Fighting Fifth or the Hatton’s Grace and could end up in the Supreme Novices’ in March.

Key Terms: £5/€5.50 per stable in the paid game. Guaranteed min. total prize pool of £100,000 (or € equivalent) with prizes paid for first 500 places (see full terms for details). Maximum one entry per person in the free game for racecourse membership and ticket prizes. Entries close at 11am GMT 13th November 2021. UK and ROI only. Full Terms and Conditions apply. 18+ Begambleaware.org