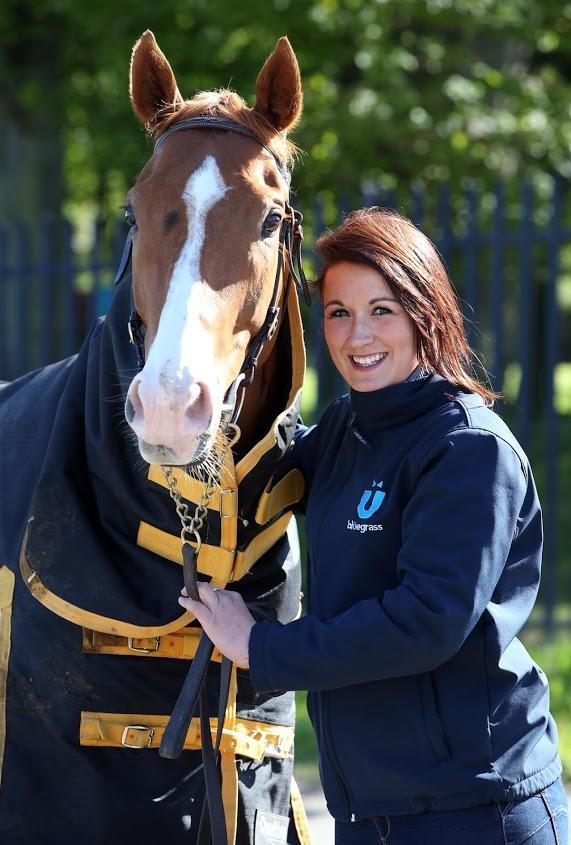 There has always been something special about jump racing in the north, Chris Grant riding for Arthur Stephenson at Sedgefield form some special personal memories from the late 1980’s. Just two miles down the road from Sedgefield are Howe Hills Stables, the training base for the up and coming Rebecca Menzies. Racing is often regarded as a closed shop, a business that is difficult to get into without a relative or close friend already inside the inner circle. For Menzies – who has only had her license a few years – it has been a long road, built on drive and determination to get to where she is, starting at the very bottom.

“I was obsessed with racing since very early teens, i looked after resting racehorses at grass for Ferdy Murphy while I was at school then worked for him full time when I left.” Starting as a stable lass, Menzies early claim to fame and earliest memory of the game was “Addington Boy running in the Grand National – still the best racehorse I’ve ever ridden & I was lucky enough to sit on him when I was 12!” Fourth and fifth in the 1999 and 2000 editions, he was a classy horse who was also fifth in a Cheltenham Gold Cup.

Having gone through the ranks as a stable lass herself, the emphasis of team unity is strong at Howe Hills. Pictures were posted on social media in the recent inclement weather of snowmen built by the staff during their lunch break. “I never underestimate how important they are . Stable staff are immense,  and we have a brilliant team of vets, Physios and Farriers to make sure everything runs smoothly.”

Since 2014 when taking out a license, Menzies has been responsible for 68 winners across both codes, the highlights coming with Pain Au Chocolat at Perth over fences and Von Blucher picking up a £16,000 to the winner handicap at Newcastle just last week! The former especially was an impressive one on his first start for the yard, having been with Dan Skelton. For Menzies to be able to repay the faith shown in her by the owners immediately, was a big plus for all the hard work behind the scenes.

Having had such a strong Grand National presence in her early years, it’s not a surprise that ambitions run to winning the race one day herself, “but I’m slowly being persuaded the other way” she warns, towards the flat. Who would she love to have as part of her stable then, one from Closutton or perhaps a Cullentra House inmate? No, “I wouldn’t take him from Pat Kelly but Presenting Percy has been educated by a genius and I’m sure he will continue to develop in to a horse that will compete at the highest possible level.” It’s that call of a future National type once more that really gets the juices flowing “if we haven’t got one in the stables at the moment there is always the chance that someone might buy one for me to train!”

So who might that be, those cards are yet to be revealed, though one suspects that she has a strong hand to play in the future, “I couldn’t pick just one, but we have some nice looking unraced bumper horses for 2018.” In a partnership with EPDS Racing, myracing has one of those bumper horses, a mare called Someone New. We still have shares available in our horse racing syndicate, she has been working well at home and will be looking for a race for her later in Janaury, potentially even pitching her into Listed class at Market Rasen on her debut for us. Syndicates are an important part of the future of racing for Menzies,  “They’re hugely crucial , I enjoy meeting new people and welcoming them into what is an amazing , dynamic and engaging sport . It should be open to all , including making more provisions for children.” Hopefully Someone New can help to spread the word for syndicates with some smart performances.

With 45 horses currently at Howe Hills and “more stables being put up as we speak” the future is looking bright for the yard, but what about racing would Menzies change if put in charge? “More flexibility from the BHA, we are in the midst of some bad weather up here (which has been well forecast) and I sometimes feel there is a delay in putting an action plan together to help lessen the blow to the North… We don’t want handouts – just common sense . The prize money issue is being addressed now and this will be a massive help from a grass root perspective.”

Menzies passion is clear to see along with her commitment to those in her care both equine and human. Campaigns for those who fill the boxes are plotted with a military precision so it’s no surprise that 2017 was a clear best for the yard. With big plans for the future, Rebecca Menzies is a young trainer that we are going to be hearing a lot more about and we couldn’t be happier to support her on her mission for success.

myracing would like to thank Rebecca Menzies for her time and wish the whole team well for a best ever year in 2018.