If one were playing a name association game, mention Oliver Sherwood and the almost instantaneous response would be Many Clouds. Whilst natural with recency bias, the likes of Large Action, Cenkos (before Paul Nicholls) and Young Pokey have all graced Rhonehurst long before the 2015 Grand National winner. myracing took a tour of the famous yard before sitting down to talk over the 2018/19 National Hunt Season with Sherwood, looking for potential horse racing tips for the season. Looked a smart recruit over hurdles last season, winning at Fontwell and Newbury. He’s “exciting” and “going chasing…rated a pound above Many Clouds after hurdling.” Comparisons with his National winner may not be entirely fair but owned by Trevor Hemmings, they will obviously be made. He will need to relax this season but is bigger and may go to Carlisle first time up over fences before loftier targets are considered.

“Real nice mare, she was running a blinder at Punchestown” before she fell four from home. She’s arguably better right-handed with her main aim the “Huntingdon Mares race in February, the Lady Protectress.” She’s ground versatile at about two and a half miles and at the age of five, she has a nice future.

“She won well at Newbury but the decent ground went against her at Cheltenham” in her final start of the season. “I think she’s better and she looks fantastic” but plans are still fluid at this point with the Pertemps or back chasing both on the table after a staying on fifth in the Coral Cup in March.

Has his quirks but has been a firm favourite for some time, a bold front-runner. “The weather will dictate where we go, it’s possibly his last year” with a second season over fences looking the most likely option at present, taking the intermediate chase route. 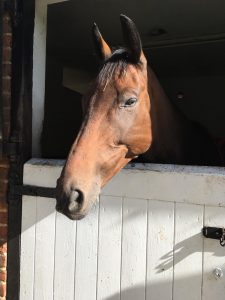 It’s taken a while for this big horse to really come to himself but it will be the bigger obstacles this year and Sherwood is adamant that “chasing will be the making of him. He jumps his fences at home really well, he’s matured” since a solid hurdles campaign last year. He should make up into at least a smart handicapper as a chaser.

“He won a bumper impressively at Kempton, the ground had just gone for him at Aintree.” He was still a rock solid fifth in that Grade 2 Aintree bumper behind a well-regarded one and “will start off at two miles” over hurdles which with plenty of flat speed on the dam’s side of his pedigree, could see him among the top novices.

“I like him a lot, he’s a natural over hurdles. The ground was plenty lively enough at Fontwell” when he was a half-length second in his only race so far. That had the look of a decent bumper for the track, the winner already a winner over hurdles. “He may have a spin in a bumper before he goes hurdling.”

“Doesn’t show much at home” but he “ran a blinder in a bumper.” The ground will have been quick enough for him on his hurdling debut at Towcester in May especially as a “chaser in the making” in fact he “might go over fences in the second half” of the season as he “jumps well at home” which would be interesting for one with so few miles on the clock.

“She’s thickened out and strengthened up over the summer, it was a very hot bumper” that she ran in at Ludlow. She travelled well on the speed that day before others did her for toe but she showed plenty of promise. “She’s from a good family and is capable of winning races, she’s likely to go hurdling.”

Took the eye in the paddock when winning a myracing sponsored race at Fontwell and his trainer is adamant that he “would’ve won at Warwick” but for coming down at the second last. “He will win again” though there are no long-term plans with this lovely recruit who is another with plenty of promise in his pedigree.

A huge thank you to Oliver Sherwood and his staff for their gracious hospitality and time.