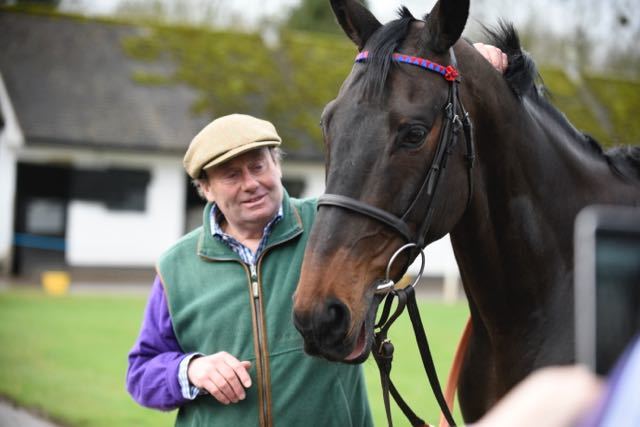 Thankfully not every day is sat hunched over a keyboard or scanning through the form book, and on Monday morning we were lucky enough to be invited down to the media day at Nicky Henderson’s Lambourn yard aka Seven Barrows.

For those not familiar with the name, Nicky Henderson starting training in 1978 having worked as assistant to the late great Fred Winter since 1974, and heads the all time Cheltenham Festival winners list with 53 victories, thirteen clear of his nearest rival and still clear of the closing in Willie Mullins. Most races have fallen his way over the years but to name drop, we must remember See You Then, Punjabi, and Binocular (five Champion Hurdles between them), Bobs Worth and Long Run (Gold Cup), Rustle and Bacchanal (World Hurdle), plus Remittance Man, Finian’s Rainbow, and Sprinter Sacre (Queen Mother Champion Chase), and those are just in the bigger races – but what does he think about his challengers for 2016?

After a cup of soup and a sausage roll we were spoilt to not one but five horses brought out at once to look over his Champion Hurdle team of My Tent Or Yours, Sign Of A Victory, Peace And Co, Top Notch, and Hargam – though participations will be going dependant. On good ground he thinks Hargam would beat Top Notch, on soft ground the result would be reversed, but despite all the kind words about all his horses, the body language seemed to lean toward Peace And Co and we feel that he is the one the trainer fancies the most. A palate operation seems to have sorted out a slight breathing issue and he is now on target again and is the one of the quintet we like the most. My Tent Or Yours did look magnificent, but his trainer did comment that given three more weeks he would be even better, and we took that as a hint that he will run well but is unlikely to be the winner on the day.

The only other horse brought out and in to view was everybody’s favourite Sprinter Sacre, who hogged the limelight and clearly knew full well he was in front of the cameras. He looked as good as we have ever seen him and his trainer was clearly delighted with his well being and really looking forward to another crack at the Queen Mother Champion Chase. His health issues have been well documented and some of us wondered if retirement beckoned, yet this season he has looked pretty decent if not back to his best, and won’t go down without a fight, with or without Un De Sceaux in opposition. Some highly promising comments made us all sit up and take notice – when someone like Nicky talks it makes good sense to listen: “He would be a sharper horse now than at Cheltenham the first time and I think he would be a better horse than at Kempton. Also he likes Cheltenham better than Kempton.

“The gap has narrowed between Sprinter Sacre and the herd but they haven’t caught him yet. He is nicely aggressive at the moment – he wants to do it – his attitude is great.

“I would be hopeful with him at The Festival, which we are able to get to this year on his terms, without having to rush anything. It has been a good journey. The appreciation he got from the crowd at Cheltenham in November was great.

“I said to Nico first time out – don’t disappoint him -if he wants to take you, great. He went up the hill and suddenly took off, like he used to, and the race was dead in 10 strides. He got a bit tired in the end but that is where we can find a little more. Somebody, some day has got to get upsides Un De Sceaux and see what happens. I hope it will be us.”

All that seems to point to a decent enough chance even at the age of ten, and who can blame anyone for following the old boy regardless.

As for all his other Cheltenham contenders, cherry picking seems the sensible route and he seems pretty keen on the chances of Altior in the Supreme Novices’ Hurdle that opens the Festival. This is a race they really want to win having had numerous places in recent years, and they may go in double handed with Buveur D’Air as well, but we got the feeling he is definitely leaning to the first named.

Unless you find a non runner no bet bookmaker hold fast before backing Vyta Du Roc whose participation is ground dependant – with the National Hunt Chase on the cards on better ground, or the RSA Chase on soft – though he seems to have each way chances in whichever he is aimed at. L’Ami Serge is better than we last saw (nothing has come to light to explain the poor run) and works as well as an at his peak Sprinter Sacre so cannot be written off quite so easily ahead of the Arkle Trophy, leaving Whisper for the World Hurdle, also each way, as he seems to have been forgotten in the build up, but is very much on target to put up a good showing.

18-1 Thyestes Chase Value Tip: ‘If he didn’t unseat rider, he may have won’ 🐎
News
News