Bonita Stables has a rich racing history. Sir Gordon Richards trained there, a man who was champion jockey on twenty-six occasions, riding 4,870 winners in the process. Andy Turnell sent out Birds Nest from this yard, a horse unfortunate to run at a vintage time for two-mile hurdlers, bumping into Night Nurse, Sea Pigeon and Monksfield through his six attempts at the Champion Hurdle. These days the yard is home to Emma Lavelle whose team has revamped the yard into a spectacular modern facility in just a couple of years. We sat down and discussed the 2018/19 season, looking for potential horse racing tips for the season. 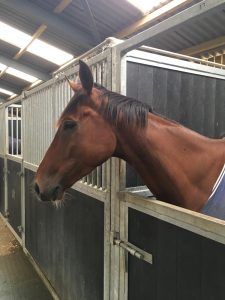 The son of Oscar has been on the radar for a long time, taking the eye in the paddock at Lingfield on his bumper debut before a narrow victory. A Grade 2 winner over hurdles, “he just loves being a racehorse.” His chasing debut may not have gone to plan, jumping to the right at Chepstow but he is “hard as nails, he doesn’t want horses to beat him.” He should learn from that and make up into a smart novice this year.

A winning return at Uttoxeter from an absence of 869 days was notable in September. “He’s the most beautiful horse, a natural athlete. He matured for his time off into a beast of a horse. The BetVictor (at Cheltenham’s Open meeting) is the target, he’ll probably go straight there.” Very lightly raced for a nine-year-old, he is one who may be ready to cash in on his promise. At home he’s like “a Ferrari working alongside a Morris Minor…he’s very gifted but mentally he’s a big baby, he finds everything so easy that he doesn’t focus.” Although he is a chaser in the making, “he has not reached the top of his hurdling potential” and with entries over the smaller obstacles at Cheltenham this weekend, it looks like he will stay over hurdles for now.

A recent non-runner at Worcester on ground drying out, he is ready to take on staying novice chases this season. “He always jumped hurdles like fences, he’s a three-mile chaser.” He’s one that the yard have been patient with, winning from 130 on handicap hurdle debut at Doncaster in February on just his fifth start. Shapes as if there is plenty more to come from him.

Runner-up in a novice hurdle under a penalty gained for a Newton Abbot win, he was beaten two lengths trying to give six pounds to a 118 rated rival. “He needs to brush up on his jumping” but ” he loves being in training, he’s an absolute playboy who pulls out every morning as if he hasn’t been cantered for a week. A tall four-year-old with a very big engine” he should get further as he matures, with decent handicaps looking well within his grasp in the spring.

“I’m a big fan of this horse, he’s always shown us plenty. He’s quick and then when you ask him to quicken he does.” He certainly showed a smart turn of foot to win at Newton Abbot off a slow pace despite plenty of stamina in his breeding. “He may have one more run in a bumper before novice hurdling.” “Unbelievably frustrating…when he’s good he’s very good.” Having dotted up off a mark of 129 last November, he looked in line for a strong campaign but didn’t go on from there. He’s had a wind op over the summer which, if helping this strong traveller finish off his races, could mean he’s about to fulfil his potential this season.

A half-brother to the Gordon Elliott trained Blood Crazed Tiger (139 rated and Grade 1 placed) he’s rather “by name, by nature. He has a huge amount of ability but can be wayward.” Placed in both bumpers so far, he “enjoys his jumping, hopefully, he’ll make up into a smart novice hurdler. He needs some cut in the ground and will just keep galloping.”

Closely related to Zamdy Man and Clyne, he looks the type to relish soft ground in the depths of winter. He has been seen just the once in a spring bumper at Market Rasen when “he probably wasn’t ready but needed an experience of going to the races. Everything he does looks nice” so he will be one to note once the ground turns.

The dark horse for the season from the yard, he was an impressive winner off 124 at Fontwell in January. He was only ten lengths behind Santini when falling at the last in a Cheltenham Grade 2 as well as chasing home the smart Euxton Lane. He ran well for a long way on chasing debut and should make into a decent novice chaser this season.

myracing would like to thank Emma Lavelle for her time and hospitality, allowing us to look round Bonita Racing Stables.