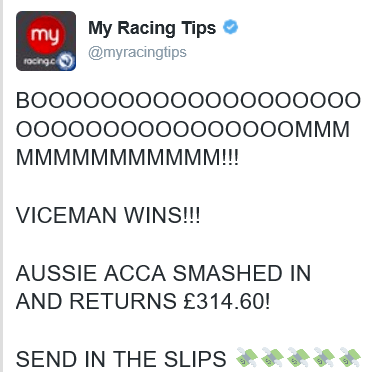 The Australian Horse Racing Tips have been in sparkling form of late. Four NAP winners and four NB winners in the last five day’s before this morning were ticking the profit over. The Acca however had missed by one on three of the last four days! Having been banging loudly on the door of the inn, it finally opened this morning and there was room for all of our followers to celebrate a clean sweep!

The morning started with a huge drifter in the shape of NB, Alvilda. Tipped up at 6/5, she took a walk in the market al the way out to 7/2 but she was not to be denied. The four year old mare had to work hard to break her duck but she got the better of a pair of rivals split by just half a length at the line and the wheels were in motion.

The NAP was next up, fairly running riot to land our 33/20 tip by a comfortable four lengths. She made it 6th time lucky, finally getting her head in front having finished 2nd on three of her last four starts. This had looked her easiest opportunity beforehand and well supported into 10/11, she may take this confidence onto better things going forward.

Finally all eyes were on the 8am race at Gosford and 9/4 tip, Viceman. Heavily supported into 5/4 before the off, supporters never had a minute’s worry. Breaking well on the inside, he disputed the lead early, an inch of rope let out round the home turn by jockey Jeff Penza and the race was put to bed in a matter of strides. Two and a half lengths the official margin but value for far more and the morning smashing of the bookies was complete.

Our Australian Horse Racing Tips go live every evening before 09.30pm. With £106 profit from the proceeding five days, they have been in sparkling form of late and the £405.60 clean sweep has put the cherry on the cake for 2016.

Let’s take a look at some of our followers win slips from this morning!

@myracingtips thanks for the tip last night pal. I’ve won over £600 in 3 days from your tips pic.twitter.com/b0GdGBwlWe