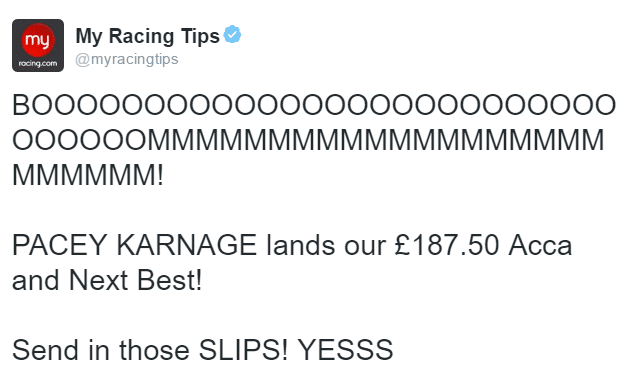 Another smashing night on the Greyhounds with a HUGE treble landing plus the NAP, Next Best and 2/1 Single!

The first in the treble was Burgess Mack. Punters were a little concerned as he drifted from 6/4 to a starting price of 2/1 but those fears were soon realised to be misplaced as he pinged the lids and led from start to finish winning by a distance of 2 lengths!

Leg 2 of the treble was also tonight’s NAP bet who was well supported having been tipped at 6/4 and going off a 1/1 fav. Yet again once the lids were opened our followers were confident they were on the right one as Cooly Caviar was another all the way winner leaving us just one away from the treble!

Then the big one, Pacey Karnage was tonight’s Next Best and the one we needed for a huge pick up for just a £10 stake! This one certainly did make us sweat for it though, 5 lengths down at the half way point and it looked a big ask, however the turn of pace was electric and he got up by a short head to bag us a £187.50 treble and £220 profit on the night! BOOM!

Just click the Greyhound Tips tab at the top of your screen to join in now! Our selections are from professional greyhound tipsters and are posted by 6.00pm every day.

Our greyhound tips made over £1,000 profit last month and, thanks to tonight, are in big profit again so far in September!