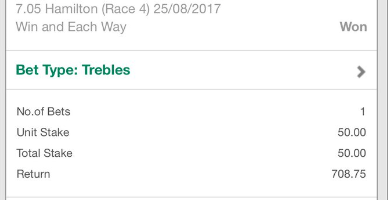 It has been a luckless run for the Win Acca tip here at MRT, earlier this month we landed 2 out of the 3 legs SEVEN times in a row! It was about time that we got the full house and what felt like an elusive Acca BOOM. Friday thankfully saw the end of that tricky spell in style, as we landed a very tasty £169.22 bet! Hopefully we can start a sequence of the winning kind from here. Tomorrow’s £76 Win Acca is on site NOW and ready to back in 1-Click, don’t miss out!

Leg #1 – Bella Estrella (2/1) – Drifted to 2/1 but in the end that just meant more profit for us. The Dermot Weld filly made it 2 from 2 starts so far with a comfortable success to land the first leg for us.

Leg #2 – Mildenberger (11/8) – The second leg wasn’t quite as straightforward. The Mark Johnston trained Mildenberger needed every yard of the 1 mile trip to get the win by a nose. He was outpaced at 2 furlongs out and being pushed along, but he rallied well to just pip Albishr on the line, that made it 2/3, we’ve been here before..

Leg #3 – Clon Coulis (11/8) – It was all down to the well backed Clon Coulis at Hamilton to bring us that Acca home. She ended up doing so in very taking style! Initially held up, jockey Ben Curtis started to make his move around the furlong marker where there were a few restless moments as he waited for the gap to open up. Thankfully he got the filly into clear air, and when he did so, she flew home! She ran out a 2 1/2 length winner and that was the August Acca hoodoo over, £159.22 PROFIT in the bag!

Plenty of our followers got on the Acca, below are some of the winning slips! They range from small stakes to big stakes, either way some nice profit was made on all of them showing that you don’t have to have a big bankroll to join in the fun!