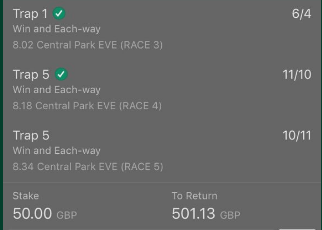 There’s just no stopping our ever-popular Free Greyhound Tips in September! Wednesday saw us add to the pot, taking us to a total of £713.70 PROFIT for the month! We landed our £105 Acca, NAP, NB & a 5/2 Single which made sure it was another incredibly profitable night for our followers. Straight after the Acca win, we got onto our Greyhound expert to rustle us up an early Acca for Thursday’s action so our followers could grab the early prices. All races are LIVE on Sky Sports! Get involved and back the £97 Acca in 1-Click HERE!

SEND IN THOSE WINNING SLIPS! pic.twitter.com/pVTjHhniHp

We also landed another one of our Mixed Accas to make it an even better night!

£10 returned £101!! Our Greyhound NAP was the first leg in winning nicely for us and Manchester United breezed to a 4-1 victory over Burton Albion meaning they won by 3 goals which is the minimum we needed to tick off the handicap tip, but it was the Chelsea vs Nottingham Forest game where we got the real sweat on! We needed Chelsea to win and both teams to score. When the 90 minutes were up, Chelsea led 5-0 which meant we needed a Forest goal in stoppage time. Thankfully that is exactly what we got!! In the dying seconds of the game, they grabbed a mere consolation goal but that is what ticked off that leg for us – BOOOOOOMM!

Our Greyhound Tips made HUGE PROFITS in July, a MASSIVE £913 in total for the month! We followed that up in August with a total of £225 PROFIT! We have already smashed in a total of £713 PROFIT in September too! Our Tips will always be completely FREE and we’re always happy to offer opinions and thoughts on racing, just follow @myracingtips to get involved! I

On most nights throughout the week we tip a Double/Acca that includes a mix of sports, these are usually Horse, Greyhound and Football tips. We post our Mixed bets between 5-6pm ONLY on our Twitter page so make sure you FOLLOW US @myracingtips so you don’t miss out!

Plenty of our followers’ sent in their bet-slips, check out just a range of them below!

Fantastic. Thanks. Getting a habit this pic.twitter.com/GPTTcNstTk

Unbelievable mate you’re just too good to be true can’t get enough of you deh deh deh deh deh I love you…… pic.twitter.com/QXAEhYlvM5

@myracingtips Second in 4 days with the treble mate cheers for winning me some cash pic.twitter.com/F9RovB6qvf