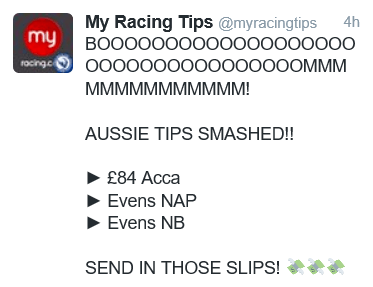 How we did it

The Australian Horse Racing Tips ended 2016 in fine form and a clean sweep this morning sees them continue in that vein. A clean sweep had been landed on the 29th of December with followers not having to wait long for another perfect morning as Thursday proved to be a lucky day once again.

Formality got the ball rolling, living up to her name on debut, scooting away from the field to score by more than four lengths. A Coolomore filly, she will have gone a long way to proving her worth with a first time win. It was a smart first impression she made here and she could well go on to better things with natural progression as she grows up.

The NB was the middle leg of the Acca, looking to put a string of second places behind him. He was slightly uneasy in the market, drifting out from 17/20 to 1/1 but he finally got his head in front at the seventh attempt. The winning margin was a length with the placed pair both six figure purchases from the sales hitting the frame again.

So it was all down to the NAP in the final leg. Mr Sneaky had caught the eye of our Australian Tipster on his previous start, knuckling down well when 4th in a higher grade and despite also being a little uneasy in the market, he got the job done in good fashion. It was a two horse race from a fair way out with the 3rd home beaten almost fourteen lengths! Back to back NAP winners and another clean sweep!

Our Australian Horse Racing Tips go live every evening before 09.30pm. With over £440 profit in the last week of December, followers have been in clover over the Festive period and the new year is shaping up to be just as strong.

Let’s take a look at some of our followers win slips from this morning!

@myracingtips bravo lads! Didn’t go for the acca, but who’s complaining. Not me 👏🏻👏🏻👏🏻🎈 pic.twitter.com/z2lsj5KfGf