It’s not long now, that is for sure. In less than two weeks time, Ireland will come to a stand-still and the UK won’t be far off it either. The eagerly awaited Cheltenham Festival 2018 is upon us. For some of us Christmas is the 25th of December for us racing fanatics Christmas comes on Champion Hurdle Day and lasts four days. The 13th of March is the opening day of the greatest show on turf and it will be kicked off with the familiar Supreme Novices’ Hurdle roar. There is a Day 1 accumulator lurking and if it lands the bookmakers will be well and royally stung. It will of course be no easy feat but is possible. We are sure you can remember that now famous Annie Power fall at the last in the Mares’ Hurdle which would have cost the bookmakers lots and lots of millions but let’s not get into that as a lot of you still have very sore pockets and haven’t quite got over it yet! Make sure you view our Cheltenham Festival Tips & Previews. Let’s move onto the horses that will be the ruination of the firms if they all happen to win on the Tuesday.

Trainer Willie Mullins and owner Susannah Ricci have been victorious in three of the last five Supreme Novice Hurdles with Champagne Fever, Douvan and Vautour and it looks like Getabird fits the profile for their fourth winner of the race in six years. He brings what looks to be by far the best form to the table, demolishing a Grade 1 winner in the form of Gordon Elliott’s Mengli Khan by nine lengths in the Royal Bond Novices’ Hurdle. To be fair to the runner up, he was giving the winner weight on the day but that would not have made any difference to the result. Mengli Khan is still the third favourite for the Cheltenham showpiece with Amy Murphy’s Kalashnikov splitting the pair in the market, that shows the race seems to have a real lack of opposition for the favourite. He is a front runner, travels and has stamina in abundance so will have no problem with that Cheltenham hill. He has never run left-handed but has serious claims. Supreme Novices’ Hurdle Tips! It certainly looks like it could be an amazing start to the Cheltenham Festival for Willie Mullins if all goes to plan and he has the rightful favourite of the Arkle in the shape of Footpad, who has improved so much for a switch to fences this season. It has been pointed out that this horse is the one the bookmakers’ fear the most and he stands to lose them a fortune if he can do the business here. Fourth in the Champion Hurdle behind Buveur D’Air last year, Footpad has really transformed into a top class chaser this season and the most notable attribute of his is his impeccable jumping. In three starts this season over the larger obstacles he has barely put a foot wrong and that saves you a lot of ground. Petit Mouchoir had the beating of him over hurdles but this is a different ball game. The other interesting runner is Saint Calvados of the Harry Whittington yard who has looked a proper horse this season. However, Footpad could take a lot of pegging back and is the deserved favourite. Arkle Tips! If there is one horse that looks bullet proof this season, it is this boy. An emphatic winner of the Champion Hurdle last season, it is normally very tough to come back and repeat the feat. However, this is an unusual year and we have seen absolutely nothing this season to suggest Buveur D’Air’s crown will be taken from him. The second favourite Faugheen has been very hit or miss since his injury and his latest second to Supasundae in the Leopardstown Champion Hurdle doesn’t look quite good enough to beat the JP McManus owned star on this occasion. Apart from those two, there isn’t a whole pile in the field that can get close to the favourite on the figures, unless Yorkhill can make a miraculous recovery back over hurdles? It is as simple as this: if the first two in the accumulator win the bet will be looking extremely good because it is very difficult to see this lad getting turned over, but there are no guarantees of course. Champion Hurdle Tips! 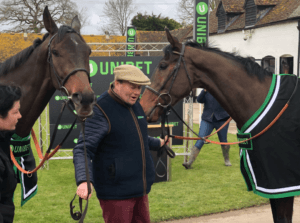 She has been there and done it and can do it again! Apple’s Jade won this race last year and saw off two fantastic mares in the shape of Limini and Vroum Vroum Mag in the process. People are going on about how Samcro is the Gigginstown House Stud banker of the Festival but Apple’s Jade has been there and done it already so for us, she is their banker of the week. Many were calling out for her to run against the boys in the Stayer’s Hurdle but Gordon Elliott’s motto is always to run his horses in races that give them the best chance of winning. The fact she beat Supasundae when they last met speaks volumes considering he is now the favourite for the Stayers but it looks like very wise placement by Team Gigginstown. If the accumulator is rolling onto this lady, we would be pretty confident she can bring home the bacon! Mares’ Hurdle Tips! All replays are embedded from YouTube and remain the copyright of the respective rights holders.