Owing to some huge fields in Royal Ascot handicaps, there are many different factors for our Ascot Tips to consider, not least the draw. Where a horse starts the race can have a huge impact on the eventual outcome. The Wokingham Stakes is a mile handicap with a maximum field of twenty-eight runners on the straight track, where the draw can be vital to a horses chance.

Something to mention before delving into the numbers, is to bear in mind that when assessing the draw it’s vitally important to determine where the pace is, as that can be just as important as discovering whether one side of the track is favoured over the other. 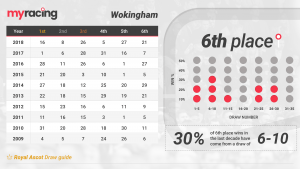 Twenty of the sixty top six finishers came from stalls ten or below, which equates to exactly a third, which is pretty much what you’d expect. But with just two from stalls higher than thirty, it appears it may be a disadvantage to be drawn extremely high (there are more stalls than runners due to reserves also being drawn).

Paddy Power are offering a generous SIX places on the Wokingham Stakes, which covers our draw stats!

A horse that fits the bill is Hey Jonesy for Kevin Ryan and Kevin Stott, drawn in stall eighteen. He ran a cracker of a race in the Commonwealth Cup last season when finishing fifth and it’s only his second ever run in handicap company, so there could be some scope for improvement in this grade.