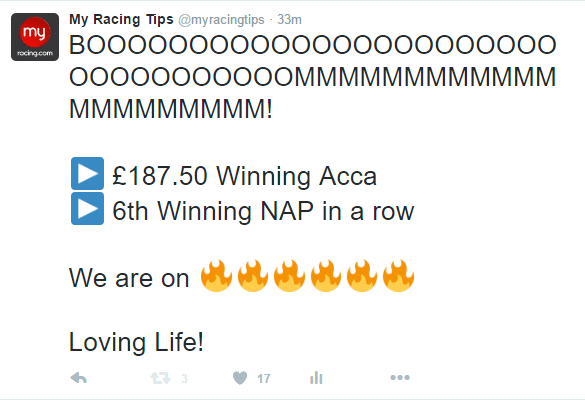 What a start to the week at MyRacing HQ! Our followers were treated to a FOURTH Win Acca success this month alone as we turned £10 in to £187.50! Make sure you get Best Odds Guaranteed with Betfair! Join Here for £30 in Free Bets! The Acca kicked off with the Ian Williams trained Perfect Summer (6/4) who looked much the best in the field before the race. He did indeed prove to be just that although his 8lb claimer Toby Wheeler left it a touch late in throwing it everything at him and he kept on best to narrowly edge out Petrou by a head! In between the Acca came yet another NAP winner as Black Grass (13/8) made it a brilliant SIX Best Bets winners in six days! The money poured in throughout the afternoon and Mick Easterby’s runner eventually went off odds on! Knowing he was on the best horse in the race Cam Hardie kept is simple and made all to win cosily by 3/4 length. On to leg 2 of the Win Acca and our representative was our Early Value Tip Jacquard (6/4). Boasting the best form in the field and dropped in class Mark Johnston’s charge was always likely to be well supported and was another who ended up being backed right in to odds! Much like the NAP his task was kept simple by Franny Norton and the horse was never threatened at any stage running out and all the way winner by over 2 lengths! View our Daily Tips, including the Acca, at 8.45am! So, on to the final leg of the Acca and having already landed three Accas this month it’s far to say we were confident in our longest priced selection Tiger Roll (2/1). This Triumph Hurdle winner was the classiest horse in the race by some distance and having shown a good return to form last time out we were surprised that the 2/1 was on offer but were more than happy to take it. He settled in mid division and stalked the leaders before coming with his challenge 3 out and within strides started to assert his dominance. As ever with this type of bet we collectively held our breath as he popped the last but in truth it was never, ever in danger. Jack Kennedy gave him a peach and we gave the bookies another good hiding!   That’s now FOUR Win Accas landed this month at £100+ returns with the last two paying £189 and £187 for just a £10 stake! Add to that our sixth Daily NAP winner from the last six tips for over £220 profit and it’s safe to say we’ll be enjoying our summer holiday this year! Here are just some of the tweets from our massively happy followers: