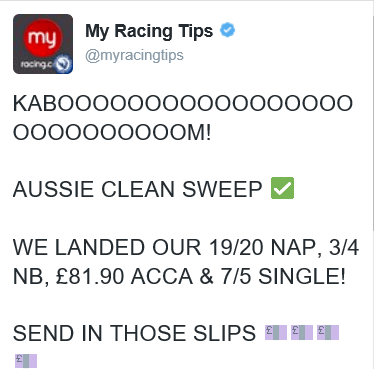 February started in the best possible fashion as the Australian Horse Racing Tips produced a clean sweep on Wednesday morning! It’s been a stunning week already at myracing.com with a £1,032 Double win on Monday as well as £150 Greyhound Profit later on Monday night!

A NB winner got us off and running as Eshtiraak went some way towards justifying his $400,000 price tag! The front pair pulled well clear of the rest with Damian Oliver doing the steering on the 3/4 pick for the Shadwell Stud operation. There was a NR in the double leaving just a single pick but Dusty Jack produced the goods, again under Oliver to land the Double and the second leg of the Acca. Only the 5th career start for the now five year old but a third career win, rewarding connections patience.

So, it was left to the NAP to round out the morning over a mile and a half. She cost $270,000 at the New Zealand yearling sales back in 2013, scoring her 4th career win this morning to further cement a future as a broodmare. The winning margin was only a neck but it was more than enough to land the clean sweep and have followers in clover once again. Her full brother went to the sales earlier in the week, knocked down for $425,000, he will be one to keep an eye on Down Under in the coming years.

@myracingtips no mention of the Aussie clean sweep yet lads! pic.twitter.com/aSGGzQVYiV

@myracingtips YES LAD!!! great way to wake up in a morning pic.twitter.com/JpmmUgCKuV