It is that time of year again where as punters we dream of the big win! Risk it for a biscuit as the ol’ saying goes. I have picked out four horses that I think will have cracking chances at the Cheltenham Festival next month. Below you will find a screenshot of the bet – best of luck if you follow.

Gordon Elliott needed the give this horse three runs over hurdles in order to get him qualified for this race and he has done just that. This boy sticks out like a sore thumb and I think he will take all the beating. The former Flat performer won a 20-runner maiden hurdle on debut for the yard over 2m at Punchestown in January. He was far from disgraced when eight lengths fourth off leading Triumph Hurdle fancy Vauban at the Dublin Racing Festival and ran well for a very long way when fourth to Teahupoo in the Red Mills at Gowran. He has been laid out for this race and we haven’t seen the best of him yet.

This is going to be the final swan song for widely loved dual Grand National winner. The three-time Cross Country Chase winner has been running poorly since bolting up in this race by 18 lengths last season but Elliott isn’t fooling anyone – he certainly isn’t fooling me anyway. I think Tiger Roll will turn up and obliterate the field again before time is called on a fantastic career. The price is rather generous in the non runner no bet market. It’s hard to see what can live with him if he is anywhere near his best.

Facile Vega is all the rage for the bumper but I think American Mike could beat him. Gordon Elliott’s up and coming star hasn’t been seen since December but his form is really strong. The horse that finished 17 lengths second to him that day was only beaten by a flared nostril in a Grade 2 bumper at the Dublin Racing Festival in Leopardstown. Jamie Codd went on record saying he thinks this horse is an absolute monster and I certainly believe him. He could go off much shorter on the day and I think he is the bet in the race.

How Billaway is shorter than Winged Leader for this race is beyond me – I really believe the latter should be clear favourite for the race. David Christie’s eight-year-old son of Winged Love has been a revelation of late and beat Billaway by 12 lengths when the pair met at Thurles in January. That was no fluke in my eyes and Billaway has already been beaten twice in this race so he is vulnerable. This is Christie’s Gold Cup, and it is the first time he will go to the Festival with a real chance. I think he will win. 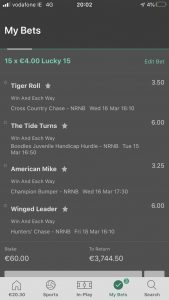